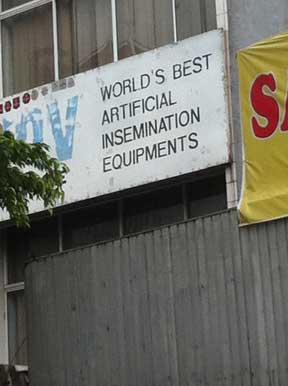 In the past week we have travelled over 17,442 miles. We’ve both laughed and we’ve cried. There has been a divorce and a marriage proposal, all in the same morning.  We’ve drunk ‘probably the most expensive lager in the world’ in the middle of the night in Dubai, and imbibed overpriced wine everywhere else. Between us we have met some extraordinary people, seen abject poverty and unbelievable wealth. A lot of books have been read, and we’ve seen a lot of movies and eaten too much ( amongst which ‘chicken satay’ of dubious origin, possibly canine?)  As a result of this, I would like to thank my sphincter muscle for not letting me down whilst waiting at the baggage carousel at Gatwick yesterday morning (wearing just a sundress , no knickers and open-toed sandals, there was no room for camouflage) and for holding it’s grip and getting me to the toilet JUST in the nick of time Thanks also to the hotel bathroom in Bangkok for giving me extreme body-dysmorphia after catching sight of myself naked ; a veritable kaleidoscope of mirrors guaranteed to make sure that ones bodily imperfections are forever burnt onto the retina and a sure way to make even the most temperate head straight for the mini-bar to drown ones sorrows. We are now back home after the most incredible week and reunited with our 2 dachshunds who, I may hasten to add, have quite a lot of explaining to do regarding certain things/stains/smells that were not here when we left.

Yes, we’ve arrived in Jakarta, Java Island, Indonesia! This extraordinary part of the world is home to millions of people, plants and animals amongst which is our hairy ginger cousin The Orang-utan, Krakatoa – The Worlds most bad tempered volcano, 17.5 thousand islands, The One-horned Javan Rhinoceros, Butterflies larger than the palm of your hand, Cannibals and Head hunters, (n.b NOT the kind who offer you a fantastic new career opportunity) Fabulous Birds of Paradise, Komodo Dragons, Over 2,500 types of orchid, Banyan trees, 1,000’s of miles of the best surfing beaches ever, Chicken Satay and now, Mr and Mrs Nevin or Pak Pete and Ibu Lottie. 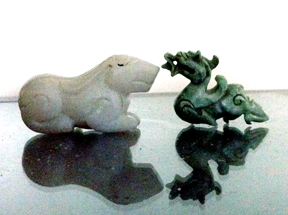 Ped’s a Dragon I’m a Rabbit 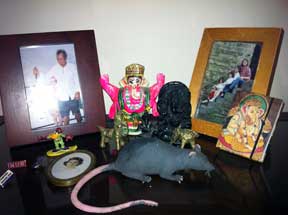 After 3 long months of anticipation, preparation, planning and packing, and then sad farewells to our children and friends, we started the long flight last Friday and after a 4 hour stopover in Dubai, and then the last 8 hour leg to Jakarta, we finally stepped off the plane late Saturday afternoon to a blasting 36 degrees of heat, a tortuously slow immigration and a further painful hour spent waiting at the baggage carousel before taking a taxi to our new apartment. 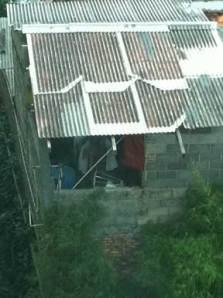 The Welcoming Committee which was made up of several cockroaches, were there to greet us but scurried off in all directions as we threw our bags and cases onto the floor and walked into what will be our home for the next few years. Desperate for a pee I found the bathroom but when I turned on the taps to wash my hands, black stinking gunk trickled out. I tried the shower, the same story and in the kitchen too. Added to this an open latrine in the boiling and airless ‘Domestic quarters’ was giving off the most vile stench of shit so that by this stage I was beginning to feel  pretty merde myself. Rapidly becoming despondent at the realities* of our new home, and with jet lag kicking in, I also noted that there were no cups, no kettle, no saucepans, in fact not even the barest of bare essentials in what had been described to us as a ‘fully furnished’ apartment. I tried the gas but just a faint, snake-like hiss didn’t bode well either and indeed on closer examination the gauge on the bottle confirmed my worst suspicions. Pedro and I who were by now totally exhausted, looked at each other and didn’t know whether to laugh or cry. Our first long awaited evening in Jakarta, in our new home, was starting to look just a tad unpromising. ( *next blog will be dealing with indigenous Jakartans realities, not spoilt Princess Yellowhair’s) 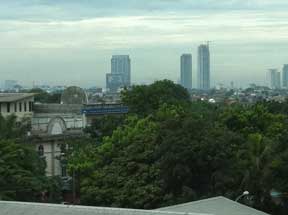 View of Jakarta from our balcony

But Pedro and I have a way, and the best way aside from ‘stiff upper lips’ and all that, is to be positive. Now the trick to feeling ‘Positive’ quickly is (from our experience) the consumption of copious amounts of any alcohol you can lay your hands on. So, on that dark, humid tropical evening we ventured out into the unknown streets and as luck would have it there was a ‘K’ store just around the corner. The fact that for the duration of the 3-minute walk to get there we risked life and limb, is another story entirely. (Next blog) 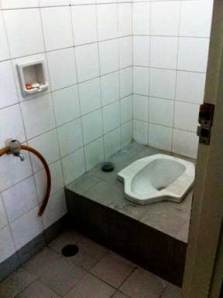 Now four days down the line, and our domestic hiccups are s-l-o-w-l-y (patience is a true virtue here) but surely being ironed out and gradually we are getting used to our new routine and life – I suspect that the process of orientation will take many months, maybe years. Every day there are new challenges and frustrations to be dealt with along with the emotional highs and lows that inevitably come with stepping right out of ones comfort zone and parking oneself in a totally alien culture and environment on the other side of the world. 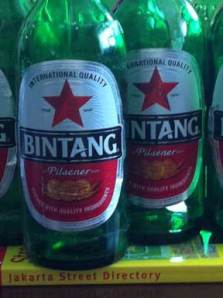 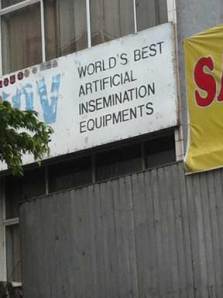 As we are essentially camping right now due to the lack of kitchen utensils etc, it does give us the perfect excuse to sample the delights of the Padang kitchen down the road (handily located next to K stores for beer and fags) I think its pretty fair to say that Pedro and I have made quite an impression on the staff there. For some reason as soon as we walk in the door of this unsophisticated Eaterie, mass hysteria ensues and there is much giggling and pointing from the chefs particularly at me, YellowHair. (In fact I get stared and pointed at just about everywhere I go as I am the only yellow haired person for miles around – it’s slightly unnerving especially if you don’t court celebritydom) 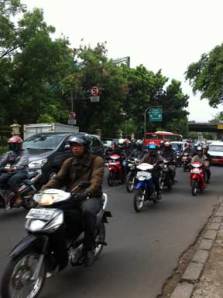 The food at Pandang Kitchen is delicious and ridiculously cheap. You start with a heap of rice which is placed in the middle of a banana leaf and then the fun begins– you choose what you like from various pans of meat, fish and vegetables, curries, fritters, eggs and sauces, pickles and chillies, pointing and asking questions which in all honesty are totally futile as nobody understands us, and we don’t understand a word of Bahasa Indonesian so it’s kind of pot luck/Russian Roulette because the one thing I do know, absolutely, beyond a shadow of a doubt, is that dog is pretty common fayre (according to my trusty Lonely Planet guide) and can easily be mistaken for chicken, especially in a stew type dish. Take last night for example;  Pedro had to go out to a business dinner so I was left to my own devices in the flat. After an hour or so and several Bintangs down the line, I decided to brave the rainstorm and run the gauntlet of 1,000’s of mopeds, cars and buses and head out to Pandang Kitchen to collect some supper. The usual giggles, pointing and banter, which I naturally took all in good humour – and after much pointing and futile questions, my shiny green banana leaf was soon stuffed with treats and then wrapped neatly and efficiently into a parcel with newspaper for insulation and tied up with a rubber band for the journey back home to the flat. 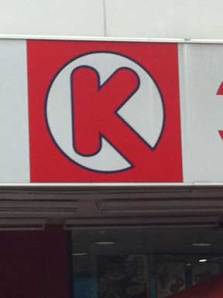 Now Folks,  the thing is that I was pretty sure that I had only ordered vegetable dishes, but somewhere along the evenings culinary line- up something distinctly ‘Fishy’ had found it’s way into my takeaway. Try if you can possibly bear to, to imagine what your Granny’s ancient very dirty crusty knickers might taste like if they were quickly boiled then hung out to dry in the hot sun? Whatever it was that I was eating was quite extraordinary and in a sort of perverted way, weirdly quite nice – I know! It sounds totally disgusting but at least it wasn’t dog. (well I fucking hope not)

44 thoughts on “Yes, we’ve arrived in Jakarta! (Looking Back At My First Post)”