Two weeks down the line and I’m starting to get to grips with the ‘Exotic’ fruit and vegetables which grow so abundantly here. Everywhere I go there are tiny stalls and mobile carts selling bananas, (some as long and thick as your arm, some as tiny as your finger) coconuts, mangoes of all different hues, star fruits, snake fruits, dragon fruits. Any manner of new and exciting, colourful and interesting things for a Bule to look and marvel at including some round, pink, fruit that look just like very hairy, spiky testicles.

I haven’t got a clue what the ‘Hairy testicle fruit’ is called but it looks fantastic and I really want to try it. So zealous am I in trying to find out exactly what everything is, and how one cooks it, that every time I go shopping I accost some poor unsuspecting Jakartan shopper (male or female, it simply doesn’t matter) and if they foolishly speak just one word of English, I pin them to their trolley and bully them into telling me all about each, and every item in the entire ‘Fruit and Veg’ section. A shopping trip can sometimes take up to 3 hours depending on how many victims I’ve managed to accost and how large the Fruit and Veg section is in any given shop.

Jakarta is affectionately known as ‘The Big Durian’ and the reason being is, that the Durian is an extremely large stinky fruit. There is no mistaking this malodorous ‘One of your 5 a day’ should you stumble across it. The smell is definitely not Granny’s knickers just in case you were wondering, but let’s just say it’s pretty foul and it stays in your nose a goodly long while. On the plus side it’s meant to taste very nice – I’ll hold judgment on that until I’ve tried it for myself, and I will let you know.

Now for the veg. There are so many different types that it’s difficult to know where to start. There is a little bit of imported stuff but the majority of it is grown here in Indonesia and like in the UK there is also the Organic option should one so desire. Also like the UK the Organic prices for veg etc are nearly double the amount so no change there. For yesterdays shopping trip, I was extremely fortunate (and so were the other customers if only they knew it) to be accompanied by a lovely lady whom I’ve only just recently met. I was in seventh heaven being guided round the greengrocers plentifully stocked shelves by my new friend who patiently answered my endless stream of questions and explained ‘what to do’ and ‘how to cook’ everything. My basket was bursting with new found delights including skinny green beans nearly 2 and a half foot long, sexy pineapples that had already been peeled and then sculpted into a natty shape, the tiniest little satsumas in the world, round purpley/white speckled aubergines no larger than a plum, very rude courgettes with some fancy knobbly bits on them, and some large green spiky fruit that sort of resembles an enormous avocado and which has the added bonus of warding off, and even curing any life threatening diseases (or so the claim goes). These were just a few of the many things that I bought in Total Fruit shop yesterday.

On the way home we went to a shopping mall. Jakarta is stuffed full of shopping malls and they are very popular, not just for shopping and eating out or going to the cinema but also for exercise would you believe? The reason being that they are just about the only places in Jakarta that you can actually walk around without being hit at high speed by a car, squashed by bus or trampled by a moped. The malls range from seriously high end smarty-pants ones, down to more modest bargain type ones. I think the one we went to yesterday was sort of mid-range on the luxury versus economy scale. 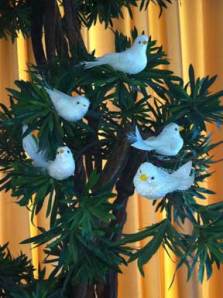 We had a great lunch on the top floor of the mall and as we were walking down to go and get the car, my extra -ordinarily slim, petite, lovely Indonesian friend turned to me and pointed out a shop across from where we standing. Looking me straight in the eye she very clearly said, (unless I’m terribly mistaken and hard of hearing to boot) –  ‘That is where all the Big women go to buy their clothes’ –I’d really love to believe that something got horribly lost in Indo/Anglo translation here but as my friends English is pretty much near on perfect, and however much I try to roll that tiny bit of conversation around in my head and re-word it, I just don’t think it did. There is no doubt about it, The writing’s on the wall – I’m off to nibble on a 2 and a half foot- long bean.