Flagrantly disobeying the rules and taking a right turn instead of a left, we found ourselves walking down the north side of Smith Street in Chinatown. There were plenty of places to eat but none of them seemed particularly busy or welcoming, and as we neared the end of the street we were beginning to give up hope of finding anywhere nice to spend our last evening. We both felt almost ready to turn around, and do what we had been told to do in the first place, which was to take a left. That was until we reached the penultimate restaurant on the street – Golden Chopsticks. This place with it’s steamy windows, was packed full of happy, smiley diners and they were all, refreshingly, Singaporean. While we were outside, checking out the menu, the owner came out and asked what we wanted? Surprised by her slightly abrasive tone, we said that we’d like a table if possible. ‘Why want eat here?’ she said briskly. ‘Well we like it and we are hungry’ was our honest reply. Still not convinced she replied, ‘you just want drink?’’ and we said ‘NO, EAT! Just eat! Please’

At last she seemed convinced that we weren’t messing around and we weren’t just a couple of English lager louts chancing their luck. She unsmilingly, ushered us in and the last vacated table was quickly cleared, wiped down and we were seated.

By sheer good fortune we had stumbled across something that neither of us had ever experienced or tried before, Steam Bowl. In a nutshell it is the Chinese version of fondue except it’s not limited to just cheese, meat or chocolate, oh no! It is a multitudinous array of foods and delights that would impress even Epicure, himself. 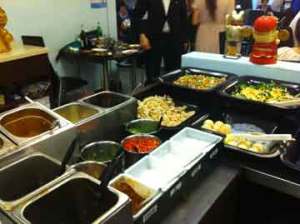 A big pan of boiling spicy stock is placed on a flat hotplate on the table and you then help yourself from the myriad meats, chicken feet, offal, vegetables, salads, fruits, tofu, beans, noodles, condiments, spices, shellfish, and fish of all kinds. There was so much to choose from that I felt just like a child in a candy store not knowing where to start. We very soon got the hang of it though, and kept bobbing up and down from the table to choose different goodies from the vast selection on offer. The only downside of the Golden Chopsticks was that there was no air-con in the restaurant and the intense humidity coupled with hanging over an extremely hot bowl of liquid and cooking, meant that it was a pretty hot, sweaty, eating experience. However, regardless of our bright pink shiny faces, we must have looked happy and excited, as about 20 minutes into our dinner, a fellow Steam Bowler came over and wanted to shake hands with us and find out about us. Very quickly we had a whole host of Steam Bowlers crowded around our table enquiring as to our visit and then much handshaking ensued. We’d suddenly become a bit of entertainment value in the Golden Chopsticks. We told the interested parties our tale and also said that we were in Singapore for our 48hr honeymoon. That was the moment when our fellow Steam Bowlers poured their beers into our glasses and all raised a toast to us. It was such a heartwarming experience and totally unexpected so that we felt truly blessed to have stumbled across such a place. It was also the point in the evening, when the beautiful traditional Chinese music that had been playing softly in the background, was replaced with James Blunt’s ‘You’re Beautiful’. Rather than be a crusty geriatric for the second time in a day, I realized that it was a ‘thumbs up’ from the rather severe lady guarding the portals of Golden Chopsticks, and her way of offering an ‘olive branch’ to us.

Stuffed full with almost everything aside from chicken’s feet, we paid our dues, exchanged warm goodbyes with our new friends, and waddled off to find a taxi.

If Wee Koon was the Fount of All Knowledge for all things Singaporean, then Mr Khan is surely Singapores finest PR and Ambassador. Whilst driving us back to the hotel, he told us all about the contented island that he shares with his 5.077 million compatriots. Although there are four main religions practiced in Singapore, Mr. Kahn was keen to impress upon us the ethos of Singapore. ‘One People, One Unity and One Religion’. He said that they all work together and acknowledge each other’s faiths. Apparently, 5 different New Years are celebrated, and all the festivals and Holy days are given equal consideration. As much stress and importance is placed on Diwali for example, as on Christmas. ‘The philosophy’, he said is simple. ‘We work hard, we go on holidays, we go shopping and we eat five meals a day’. It was all beginning to sound a bit too good to be true until that is, when we arrived back at the hotel and the doorman opened the taxi door for us. Overhearing us thanking Mr. Khan for a great journey and his wonderful PR job, the doorman within earshot of Mr. Khan, said to Pedro, ‘Sir, in Asia, we don’t say thank you to the taxi drivers’. Pedro and I looked totally aghast at the doorman’s comment and in unison we both replied, ‘Well actually, we do’.