I love writing my blog and sharing my experiences with anyone who cares to read about them, but the best part for me is when kind folks leave a comment. Not only does it show me that they’ve taken the time and trouble to read through my blurb, but also, by leaving a comment, they are then entering into a dialogue personally with me and I LOVE THAT. A blog is a way of communicating with the world, and it’s a wonderful feeling when, by sharing my own personal take on life and the universe, it then opens up endless possibilities for dialogue with other folks. Many of  the people that leave comments on my blog I’ve never met, and many of them live on the other side of the world, but by sharing their thoughts and ideas not just with me, they also share with others as well. By leaving a comment, you are not only making the writer of the blog VERY happy, you are also putting your views, ideas and thoughts out into virtual space and to whoever per chance reads it. It’s magic stuff and I’m going to give you a classic example of how it works right now. 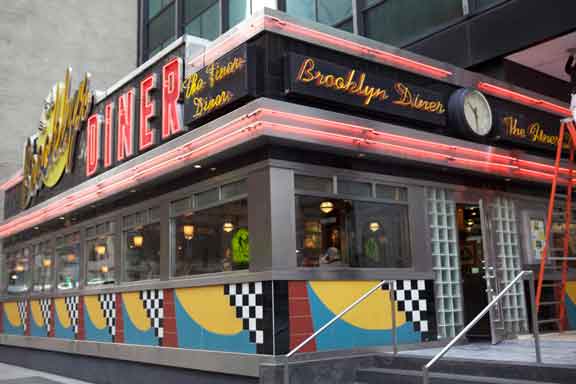 The Irishman and I have now been in New York for 3 days. The first day and a half he was in meetings solidly so it was only yesterday, and today, that we have the chance to do stuff together. We both love eating, and we both love art. We are both artists – (Irishman being infinitely more talented than I am but I’ll forgive him for that, as I’m much prettier)

A couple of days ago Belligerent Man (who incidentally writes a fantastic blog, more of which I’ll write on later) left some comments on some of the stories that I’ve written over the past week. He’d carefully noted my indulgence and passion (aka full-blown greediness) for all American food and, because he’s been a sweetheart and followed my trail via my written word, knew that we had arrived in NY a few days ago. Yesterday he recommended that I try out Carnegie Deli for their famous corned beef and pastrami.

Pedro and I left our hotel early yesterday morning, and in my haste I forgot to check out where Belligerent Man’s recommended eaterie was. After we had spent a full day  at MOMA, it was time for our next gargantuan sized meal but not before a drink or two. We walked round Times Square and found a perfectly foul Irish bar in which to lubricate ourselves, before then setting off on our quest to find dinner.

It wasn’t looking promising as all the restaurants in the area where tourist ones and we didn’t have any local knowledge.  In the back of my mind I was kicking myself for not taking the trouble to Google the address of Carnegie Deli, as I’d set my heart on corned beef and pastrami. We’d started walking back towards our hotel and were nearly there when suddenly, Pedro stopped and said to me ‘What did you say the name of that place was?’ ‘You know, the place that Belligerent Man recommended to you?’ – ‘Carnegie Deli’ I replied. ‘Well here we are then’ said the Irishman showing me the entrance.

Call it fate, call it Karma, call it what you will, but I swear this is because it was meant to be, this is what the past 2 months of writing my blog has lead me to.

Knowing what we know now about portion control, or rather lack of it here in the States, and with no self-restraint whatsoever on my part, we’ve now got savvy and just order one portion of anything to share between us. We had the most colossal sandwich ‘The Woody Allen’ a humungous amount of protein bound to put hairs on anyone’s chest and made up of an equal amount of hot pastrami and corned beef. It was more than enough for 2, but I just couldn’t resist ordering the chicken soup with matzoh balls as well. Total overload but totally delicious.

Before I finish, a HUGE Thank you goes to Belligerent Man for his comments and for his great recommendation. Please check out his blog you won’t be disappointed. His wit and humour is razor sharp, and he writes about all things in his own inimicable style.

belligerent man | Getting a little less angry one entry at a time. I think.

And lastly; be careful what you Google. Someone must have accidently found my blog this week by typing in ‘car journey, full bladder’. Don’t you just love the Internet?

4 thoughts on “A Saturday In New York”