The Irishman and I love our visits to Bali, and we both feel very blessed and fortunate to have this opportunity to travel there as frequently as we now do.   One of the things that most excited us when we first visited the Island, aside from the obvious beauty of the place, it’s stunning beaches, relaxed attitude, and pace of life etc, was the fact that after 5 months of living in Jakarta, which is predominantly Muslim, Pork was now back on the menu.

Bali is very famous for its Babi Guling – Roast Suckling Pig. It is a dish that we’ve been greedily fantasising about eating ever since we first arrived on Bali’s shores a few months back. However, since last Saturday, our fantasy about, and desire for, Babi Guling has vanished. We no longer have any wish whatsoever to eat Babi Guling and I shall tell you why.

16 years ago I ran a 40-acre organic smallholding in North Yorkshire in the UK. It was a totally non-profit project as I just about covered my costs during the 6 years that we were there, but it was a wonderful time in all of our lives and an idyllic setting in which to bring up 5 young children. I worked very hard to earn the cachet of being registered with the Soil Association (UK benchmark and guarantee for good Organic husbandry and strict organic practice) and looking back on it, I am very proud of my achievements. I learnt a lot along the way.

One of the things that I taught myself was how to inseminate pigs. Aside from cows, sheep, goats, geese, chickens, ponies, etc I kept 2 gilts (teenage female pigs), a Gloucester Old Spot and a Berkshire. The sheep were easy to breed as I borrowed a neighbour’s tup each autumn. For the cows, I hired an Angus bull. For the 8 nanny goats I kept 2 very smelly Billy’s to sort them out, but when the pigs were mature enough to breed from, and the time came to find them a mate, I had a bit of a quandary. If I hired a boar, he was going to cost me an arm and a leg to feed, plus there are strict transportation rules in regarding travel arrangements for pigs. They need a license; they are also a nightmare to move about (have you ever tried to get a pig to go where you want it too?) so I ended up deciding that I would try my inexperienced hand at artificial insemination despite never having been taught, or shown how to do it.

Assiduously every evening after the children had gone to bed, I studied my agricultural manuals, gleaning any information that I could from them on the whys and wherefores of AI. There were some terrifying diagrams of 2 foot long catheters with dangerous looking corkscrew ends and lengthy descriptions of the perils of putting the catheter into the ‘wrong hole’ (urethra)(anus) What’s more the book said that ovulation only lasted for just 38-42 hours, so not a huge time frame in which to get Miss Piggy pregnant. If all this wasn’t complicated enough, it was then knowing what signs to look for to see if the pig was in oestrus. ‘Check the vulva daily’ – ‘look for swelling and changes in the colour, clear discharge….’. ‘When the pig is ready for the boar, she will stand stock-still. Check by placing pressure on the pigs back, if she moves she is not ready to mate’.

I became totally obsessed with checking my pig’s vulvas. Twice, sometime thrice a day, I would go out into their field and take a long hard look at their nether regions. Eventually after a couple of weeks I noticed that my white pig was indeed getting a rather rosy backside and a day later it started to look pinker still. If I wasn’t much mistaken, it definitely looked a bit swollen. I pressed down hard on her back and she grunted, loudly. Throwing all caution to the wind I decided to order some semen. I checked through the Yellow Pages and found an AI company who could arrange some Gloucester Old Spot semen for me the next day. I arranged with them that I would go and collect it the next morning after my 3 eldest children had gone to school.  Bundling baby and toddler into the Landrover we set off down winding, country lanes to Busby Stoop service station almost 30 miles away. Busby Stoop Garage is a petrol filling station on a roundabout near Northallerton. Aside from selling petrol and diesel, it also sold ice creams, sweets, cigarettes, and newspapers, plus of course the added attraction of being the collection point for a large local pig semen company. When I arrived there, nestled in the freezer chest amongst the ice cream cones and lollies, was my AI kit containing one bottle of Boar no.35 semen, one 2ft long catheter and a tube of KY jelly. I could hardly contain my excitement.

Back at the farm after a 2 and a half hour round trip, both baby and toddler were ready for a nap so after feeding the baby and then settling them both down, I went out to the field to find Miss Piggy and do the business. There she was rooting around happily in the soil with my other black pig. I threw some pig nuts down into the trough and set about taking the semen, catheter and lubricating jelly out of my pocket. In my haste I had forgotten to pick up some scissors from the house so there was nothing for it but to bite the end of the semen bottle off in preparation for filling the catheter, which meant that I also got to have a taste of it. (I could be very rude here but I shan’t, this is meant to be a child friendly blog)  I lubricated the catheter generously with the KY jelly and screwed the non-corkscrew end into the bottle. By the time I’d finished phaffing about, the girls had finished their food and had already wandered off down the field.

With no time to loose, I strode purposefully towards the white one nervously humming a romantic tune to get both her and myself in the mood as I gingerly lifted up her tail and started to insert the long, slippery catheter into what I hoped, and prayed, was her vagina. Once it was in the full length, I then wracked my brains trying to remember what the book had said about turning the catheter to lock it into the cervix. Was it a turn clockwise? Or anti-clockwise?  Slowly I started to turn the catheter, all the while imagining what on earth was going on inside my poor pig, whilst desperately trying to remember the diagrams in the book. I felt a locking sensation and started to squeeze the bottle of semen gently down the tube. At that moment the pig had plainly had enough invasive action and started to take off at speed round the field. So much for the ‘standing’ part I thought to myself as I raced after her, holding on for dear life to the catheter and semen bottle, whilst desperately still squeezing the semen from the bottle and at the same time trying not to get my wellies stuck in the boggy mud or trip up on the ruts and potholes. There was no way on earth that I was going to give up on this now. I’d spent weeks on vulva watching duty, used gallons of diesel to get to Busby Stoop and back and used up almost an entire morning driving there and back. No, I was not going to be beaten by a runaway pig with a low sex drive.

Eventually the contents of the semen bottle emptied, the pig ground to a halt, and perspiring somewhat, I slowly, and carefully extricated the tube out from inside her before heading swiftly back to the kitchen to rinse my mouth out, wash my hands and put the kettle on. 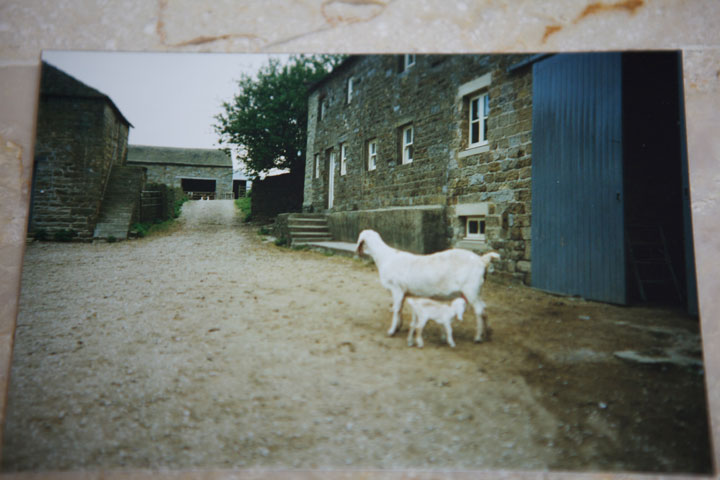 14 thoughts on “Pig Ignorant, And Why I shall Never Eat Babi Guling – Part One”