I’ve got so much that I want to say here that it’s difficult to know where to start. There are loads of positive and happy things which I want to tell you about, but there is also something very upsetting which I need to get off my ample chest and have a bit of a rant about. The rant part certainly demands more than a cursory line or two. 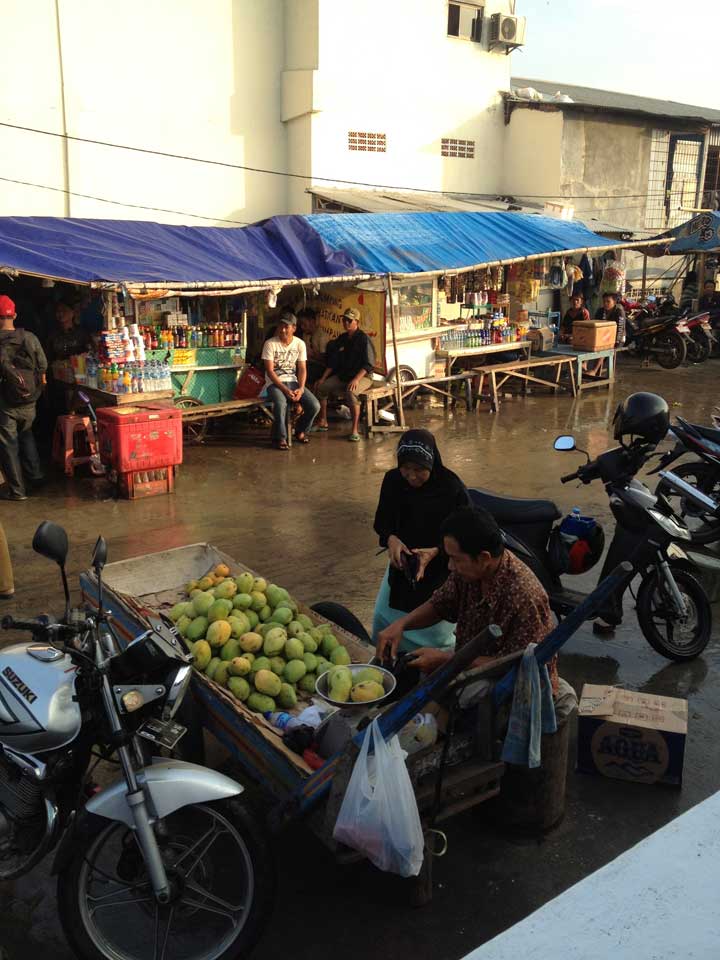 After much consideration, I’ve decided to split this post into 2 parts, today obviously being Part One. Hopefully it will be a jolly travelogue with some pretty pictures and a few handy tips thrown in for good measure. The second part (tomorrow, or the next day..) will not be at all jolly and will involve some tongue-lashing and some hideous pictures, be warned!

As you may have gathered (if you read my last post ‘My Indonesian Potty Training’) we visited an island last weekend called Pulau Tidung. This island is one of many in the Pulau Seribu, which are a cluster of small islands in the Java Sea north of Jakarta. Pulau Seribu means Thousand Islands, which is a little misleading because there are actually only 110,120, or 130 depending on which Google search you find.

These islands are very popular with Jakartan’s as they are relatively easy to get to and ideal for a weekend trip away as an antidote from the madness of Jakarta. The islands are perfect for snorkelling and diving as the clear, warm, waters around that area are rich in coral and sea life. The intense heat of the sun beats down, unmasked by the canopy of pollution of which we are so familiar with in Jakarta.

To get to the islands you need to get up early as the boats leave Muara Angke at 7am.

Muara Angke is worth an entire blog post in itself as it’s not just a port but also a massive fish market literally teeming with people and fish and a variety of smells ranging from plain fishy to so rank that it made us want to chuck. Even the taxi driver had his hand over his nose and mouth. I absolutely have to go back there with my camera and spend an entire night taking it all in. The sights, and sounds and not just the smells, were extraordinary. 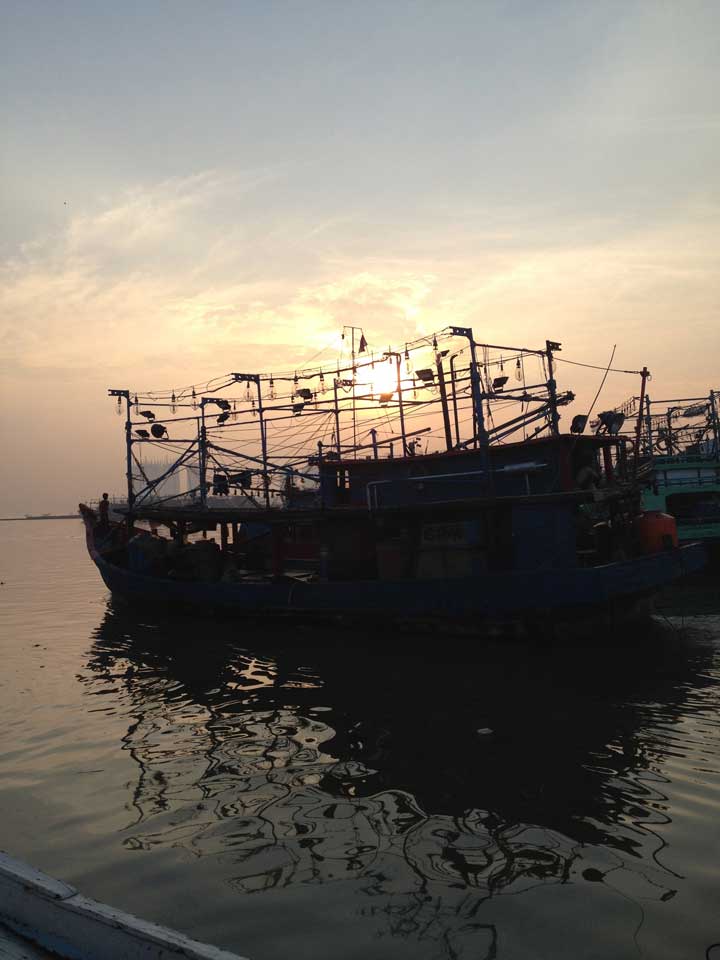 Being the hopeless romantics that we are, we opted to go to Pulau Tidung on a traditional boat. We paid 30,000 IRP ($3 US, or £2.02 UK Pounds) each for the trip. Almost as soon as we had got on the boat we started to have some serious misgivings. I don’t normally give a tinkers fart about Health and Safety but that’s only because back in the UK people are so anal about it that I’ve never had to give it a second thought. Moving to Indonesia however has been an eye-opener since there don’t seem to be any safety standards whatsoever. These traditional wooden boats are old, some of them built around the time of Noah.  There are 2 decks; a lower one in the airless bowels of the boat and an upper one, which has so little headroom that you, literally have to crawl to get along it. There were no seats on either deck, just floor. The ETD of 7am came and went as more and more passengers flooded onto the already over-crowded boat. By 8am just when I was starting to get desperate for a pee and paranoia was setting in fast with me imagining every conceivable accident that could befall us on this trip, we eventually left the harbour and started the 2 hour, arduosly slow, and painful  journey to Pulau Tidung.

Mercifully the sea was calm, but I had taken the precaution of buying some travel sickness pills at 6.30am from the tiny supermarket at the port. My Bahasa Indonesian isn’t too bad but unfortunately ‘travel sickness pills’ has not yet been added to my vocabulary so I found myself having to play a rather one sided game of charades in order to obtain them. I pointed at my mouth, opened it, and then pretended I was being sick. This rather OTT mime, was then completed by melodramatic puking noises and then a sort of natty movement with my arms to indicate rough seas. Either I am a very talented actress or, the shopkeeper has played a lot of charades himself because in the blink of an eye he reached up to the shelf behind the counter and produced a packet of pills with a picture of a boat, a car and an aeroplane on the front. I was so proud of myself that I bought 3 packs of pills to celebrate.

The boat ride was so hard and uncomfortable, that even with a well-padded arse such as mine an hour into the journey it really was beginning to feel like there were 1,000 islands and that we had chosen the 999th to travel to. To keep my mind off needing the toilet, and the pain in my buttocks, I entertained myself by watching the young girls preening themselves, putting rollers in their hair, taking the rollers out, taking endless photos of each other, and my wondering how many people fall overboard on these trips. The rest of the time I spent working out an emergency survival strategy for what to do if the boat did actually start to sink. Just as I’d come round to the terrible conclusion that it would be curtains for all of us if it did, the boat chugged into the harbour at Pulau Tidung. 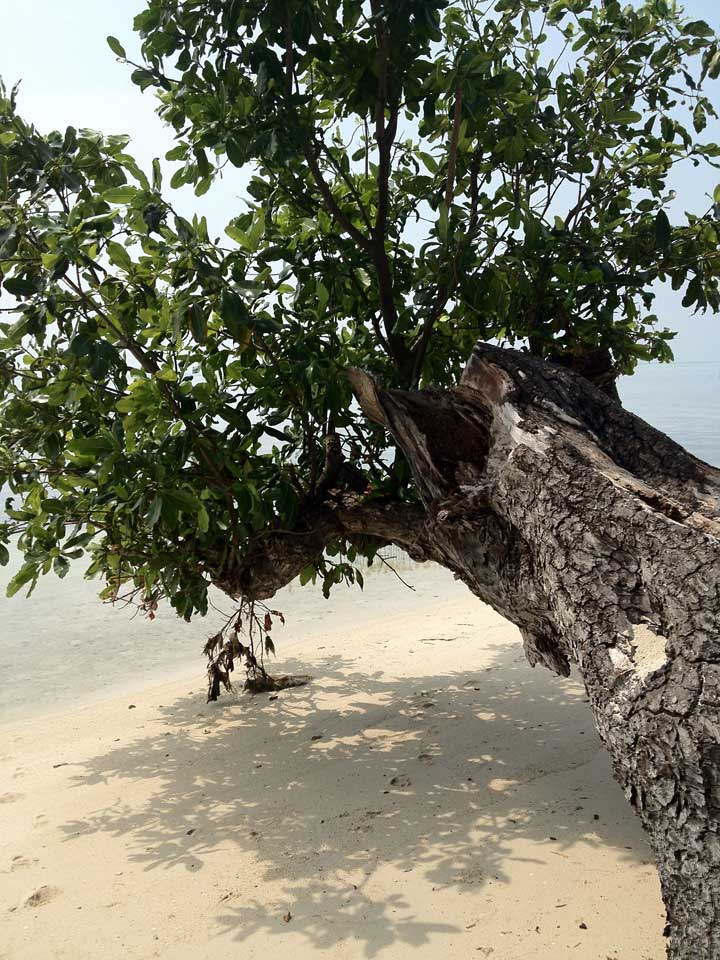 Pulau Tidung is a very pretty island. I’m not sure how large it is so I’m going to hazard a guess that it’s around 4km long and about 500 metres wide at it’s broadest point. There are no cars on the island, just scooters, bicycles and some bone rattling transport, which are a bit like motorised rickshaws. I stupidly forgot to ask what they are called. They can easily carry two dainty Indonesians but are a bit of a squash and a squeeze for two Europeans unless they are both size 0 which you will have gathered by now we are not. We hired bicycles to ride around on but it was something of a disaster as Irishman’s bike had no breaks, mine had a bent front tyre and Mikeys only had half a seat so we gave up and used the bone-rattling, motorised rickshaws to get around in or walked instead. 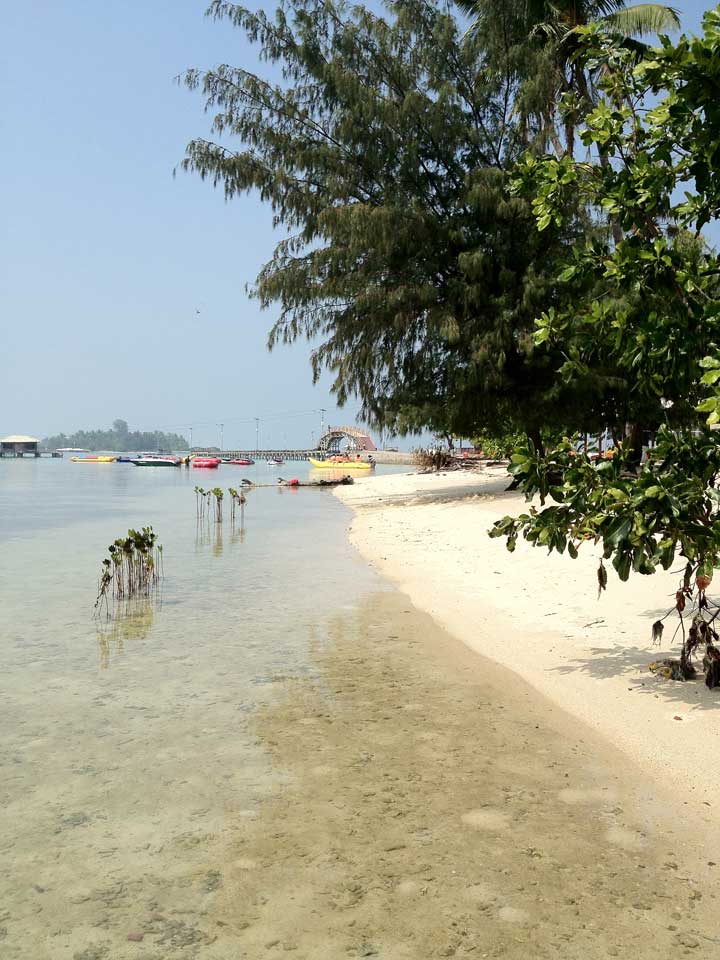 As mentioned in my previous post, we found a good place to stay, basic but clean (well, it was clean before I had my mishap) and meals were provided should we wish for them. This home stay cost 60,000 rps for a room, which is something in the region of around £4.00 or $6.00 so not a bad price. Having done some orientation, which basically meant finding out ASAP where the nicest place to sit and have a beer was, we soon started to recover from the journey and relax into island mode which wasn’t difficult as the islanders were very friendly and the place had a lovely calm vibe about it.

I would have loved to have visited Pulau Tidung’s little sister island, Pulau Tidung Kecil, but the wooden walkway joining the two islands  (see below) looked like it was about to collapse, so having tempted fate once already that day, I decided to give it a wide berth. 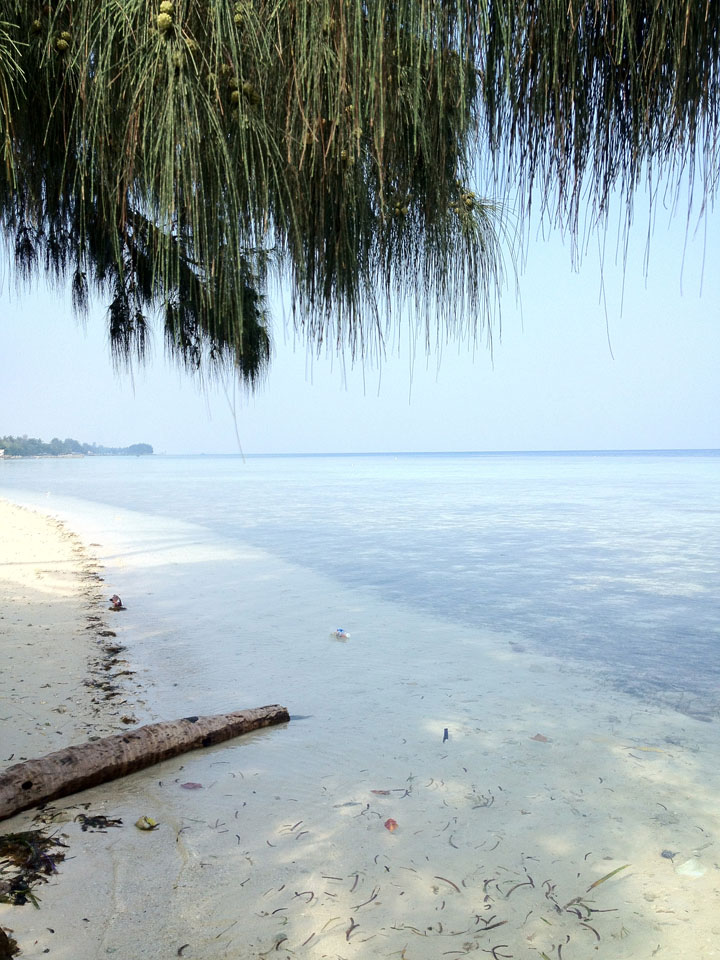 We ended our day with what I have to say is the best meal that we have eaten to date in Indonesia. This tiny outside eaterie called Seafood Cafe with it’s primitive seating of just a plank of wood to sit on and an old worn table, served us up a meal fit for a king. We ordered prawns, some which were just plainly barbequed, others in a saus pedas (spicy sauce) deliciously fresh squid served with garlic and ginger, nasi putih, plain boiled rice, a selection of gobsmackingly hot sambals, and the bestest, most succulent ayam goreng. They didn’t sell beer at the café, but the lady who owned it went down the road to buy us some. As we sat under the stars with the heat of the day still caressing us, we felt truly replete and very happy.

8 thoughts on “Pulau Tidung: Part One”