Boy you lot are a bloodthirsty bunch judging by your comments in the previous post. I can almost feel you baying like a pack of hounds for blood!  I’m sitting here thinking well, what should I do now? Should I dish up some sort of Joshua Tree grizzly murder story where upon Irishman and I stumble across the pathetic remains of what’s left of a person hidden in a rockpile in the middle of the desert; their body horrifically dismembered, their brains mercilessly bashed out by ‘hammer man’ Or, do I simply carry on with my innocent account of our trip to Joshua Tree which I’m starting to fear is going to be the most terrible anti-climax. Tempting though it is to go down the Murder, Mystery, Suspense route, I’m no Agatha Christie, so folks, if this next part is an anti-climax for you then I apologise.

What I will say is that everything I wrote about in my last post was absolutely true. I am prone to exaggeration on occasion (who doesn’t like to embellish a story) but in the case of the characters at the gas station, they really did exist, they still do as far as I’m aware so be warned.

After our terrifying trip to the shop, we spotted a bar on the other side of the road, The Joshua Tree Saloon. Never have I driven a car so fast from one side of a road to the other. This oasis of calm and safety, beckoned us, and before we knew it we were tucking into juicy burgers, (which were out of this world) and imbibing the local beer. Having eaten and drunk our fill we set off back to our cabin.

It was only after having eaten and drunk, that I started to feel human again and be able to fully appreciate the extraordinary beauty of the place. Yes, it was bitterly, bitterly cold but for the first time in a long time I felt absolute peace and tranquility in my surroundings. After unpacking the car, and putting on several more layers, Irishman and I steeped back outside and stood in awe, not speaking a word as we gazed up at the vast canopy of stars in the huge, midnight blue skies above us.  In a place as desolate and remote as this, one cannot but wonder at the splendour of our earth and its fellow planets, the power of nature, in short, the enormity and magnificence of the universe that we inhabit. Standing there, quite literally star-struck, marveling at Gaia’s omnificence, no light pollution nor noise from anywhere save the wind rustling through the desert shrub and the call of a lone coyote we both felt very humble. With what lay above and all around us, in that moment we felt as tiny as the grains of sand beneath our feet. 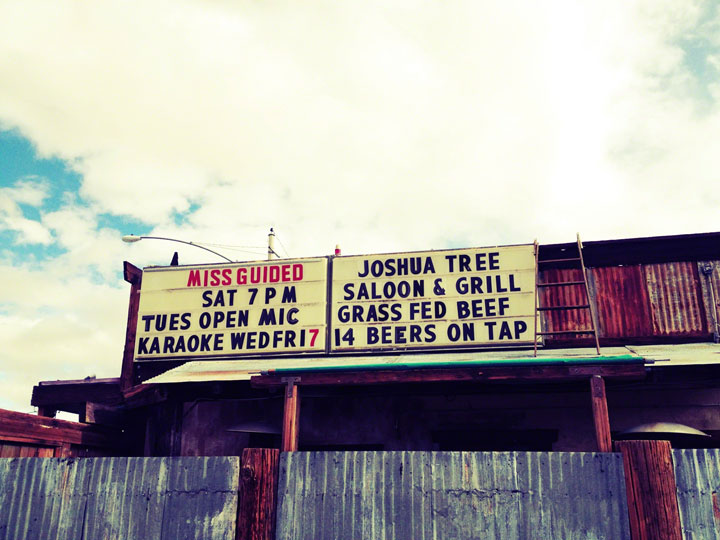 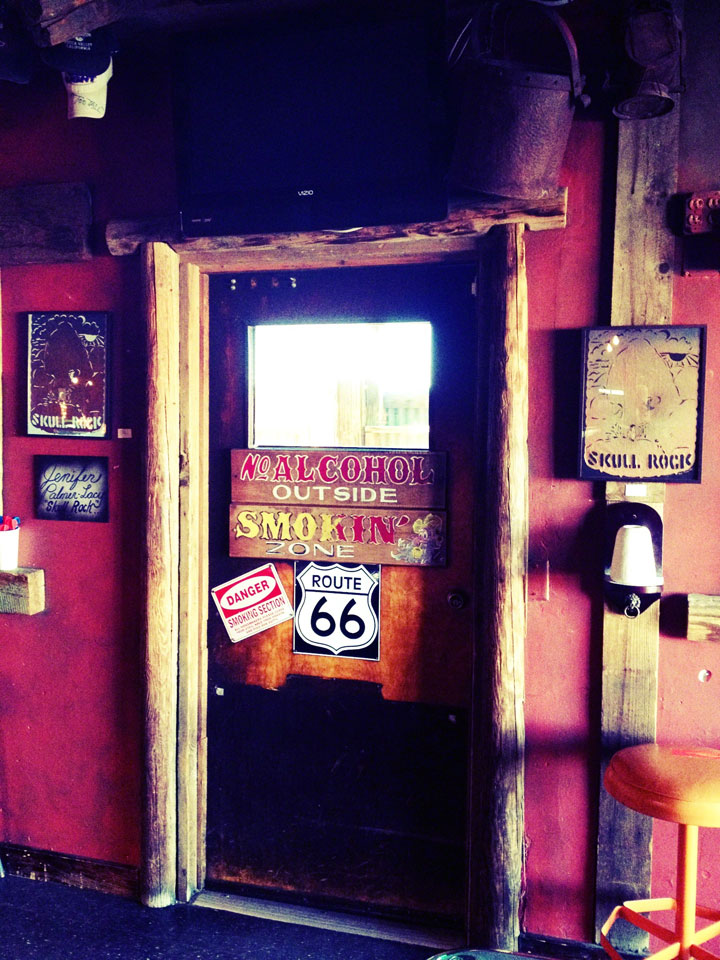 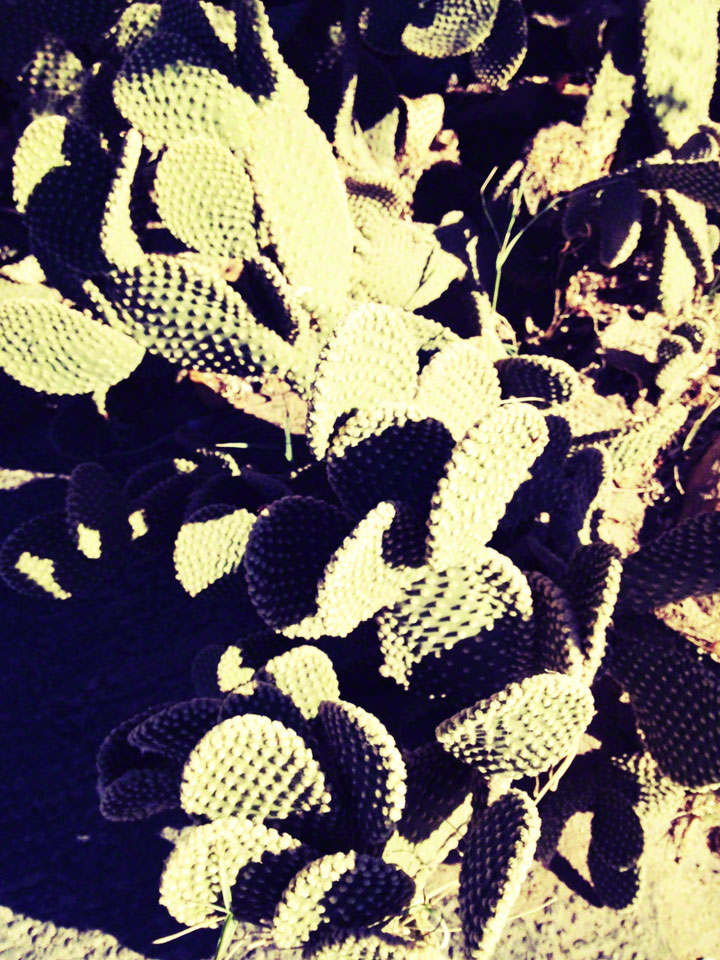 It was so cold in the cabin that we slept fully clothed. We’d joked about making it a second honeymoon but there was no way that either of us could face getting undressed it was so damn perishing in there so we curled up together like animals for warmth and soon the soporific howling of the desert winds worked their magic and we had drifted off into deep sleep.

We had just two days to enjoy and make the most of Joshua Tree and when I woke at daybreak the first thing that I did was rush excitedly to the window, draw the curtains and soak in the early morning light picking out the mysterious shapes of the Joshua Trees in the landscape. This was all so new and unfamiliar to me, so exciting that I felt goosebumps – I was on my very own wild-west movie set and like all cowgirls it was time to get the fire going and make the coffee. 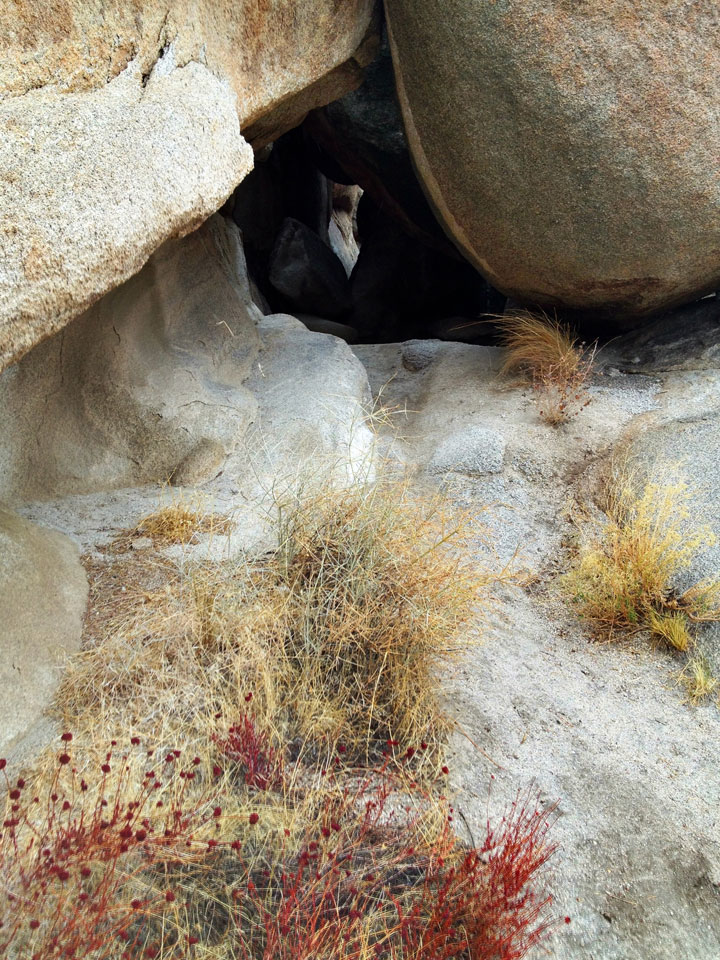 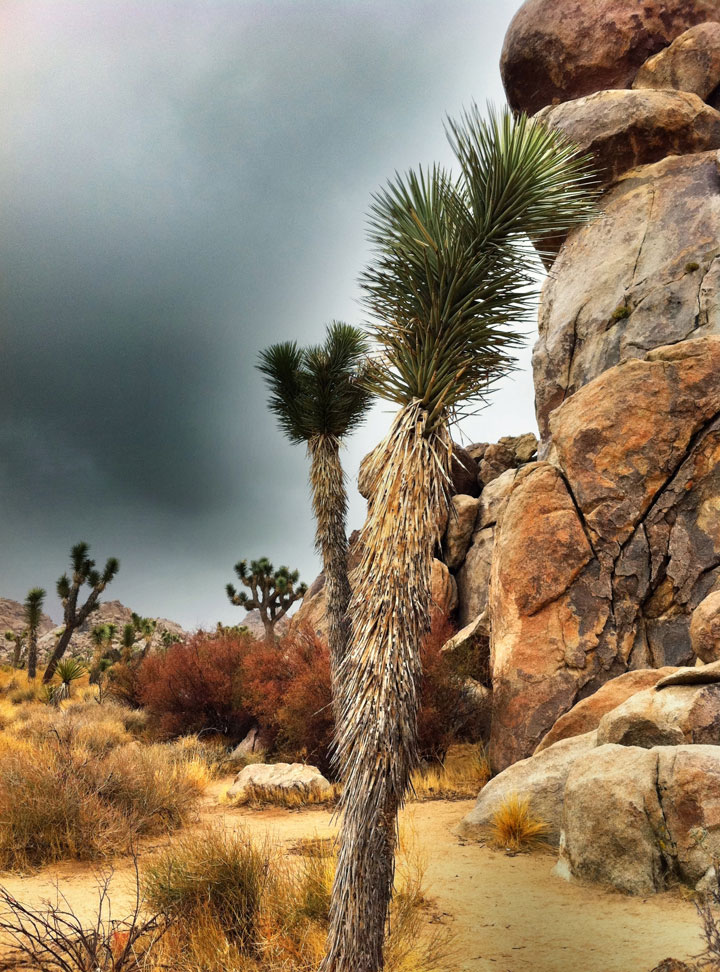 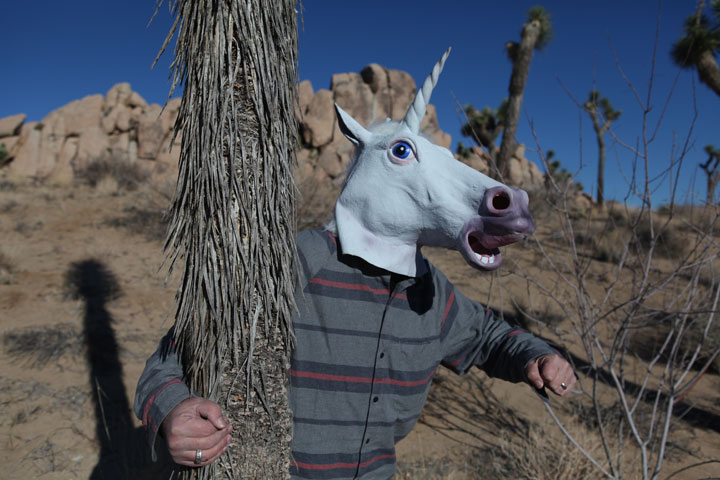 There were many highlights on our trip but meeting my blogging sister Intricate Knot and her husband, Steve was absolutely the tops,the number one spot. We hooked up with them for meals and laughter over the course of our two days, but that first morning was when we met for the first time and had breakfast together before heading off on our own different adventures for the day. By 11am the heavens started to look ominously grey and soon the rain started to pelt down as we ventured into the park itself. It rained and it rained and it rained all day but nothing was going to dampen our enthusiasm or the thrill of being in the upper part of the Mojave Desert. 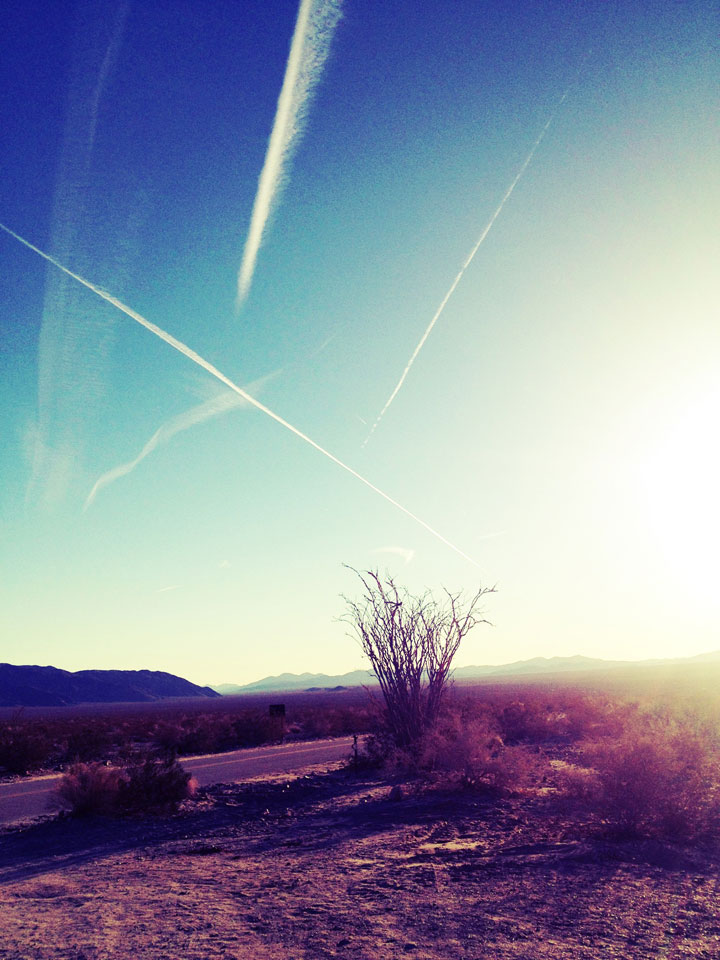 I knew nothing about Joshua Tree before I went there and I still have much to learn, but for those unfamiliar with this extraordinary part of the world it’s an area of 800,000 acres in Southern California, which straddles the boundary between the Mojave and Sonoran Deserts. There are six mountain ranges and the climate varies widely depending on the seasons. In summer it can be over 100 degrees F and in winter freezing with snow on the mountains. The landscape changes dramatically with the strange rock formations and literally 1,000’s of spiky Joshua Trees in the north down to the wide-open spaces in the Pinto Basin and it’s cholla cactus plants. Native American Indians, cattle ranchers and gold miners have inhabited this uniquely beautiful area over the millennia. In 1994 the Desert Protection Act upgraded Joshua Tree to national park status.

With its mountain ranges and the strange rock formations that make up much of the landscape it is one of America’s premier hiking and rock-climbing destinations and people travel from all over the globe especially to experience the challenge of climbing the rock formations some of which are over 20 storeys high. What is so fascinating about the geology is the way that the formations are made up. Some of the huge stones look like they have been deliberately placed one upon each other, huge boulders balance atop each other and in my mind I can only imagine that at night giants have had such fun creating this Dr Seussian landscape, this wonderful place that is Joshua Tree. 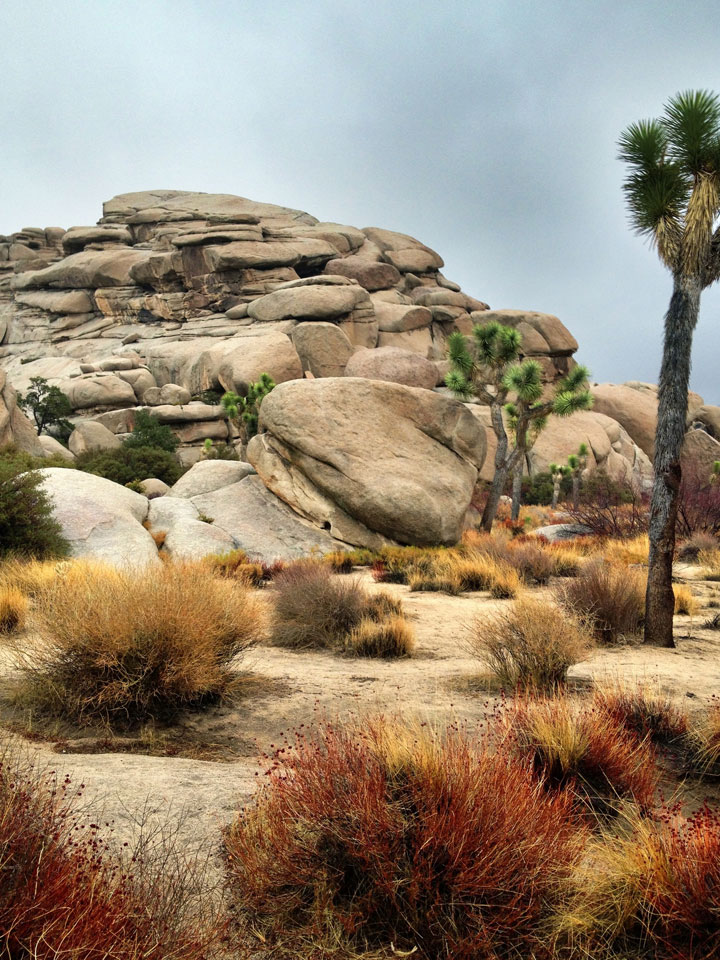 30 thoughts on “I’ve Been Through The Desert….”