This week something rather extraordinary happened. On Tuesday, quite of the blue I received an email from a man in Holland; he explained that he had found me via my blog and was interested to know how I was related to Izaak Dignus Fransen van de Putte? (1822-1902) (About a year ago I mentioned this relative and must have tagged his name in the post. He was an important figure in Dutch politics)

I sent an email straight back explaining that I was descended via my Dutch Grand-Mother. Less than an hour later through the ether came an email from Holland explaining that I was related but only distantly. What transpired was that in fact my new correspondent and I were in fact related. It surmises that I may not be as directly linked to ID F v d P as I had originally thought (he was the younger brother of my great, great grand-father) but I’ve gained a new cousin and a rather a wonderful one as it turns out.

Over the next couple of days, emails were flying between Indonesia and Holland as we exchanged various bits of information about the family and then on Thursday evening my newly found cousin asked me if I had any photographs of my Grandparents later on in their lives? I sent an email back saying that I probably did have one or two but back in storage in London. However what I did have was a small painting of my Grandmother made when she was about 5 years old. I took a photograph of the miniature and sent it in my next email.

This little portrait of my Oma (Grandmother) is one of my most treasured possessions that I inherited 25 years ago after my Mother died. I have often looked at it and wondered where, and when it was painted and thought how very sweet my Oma looked, wondering how old she was and how true the likeness really was to her? 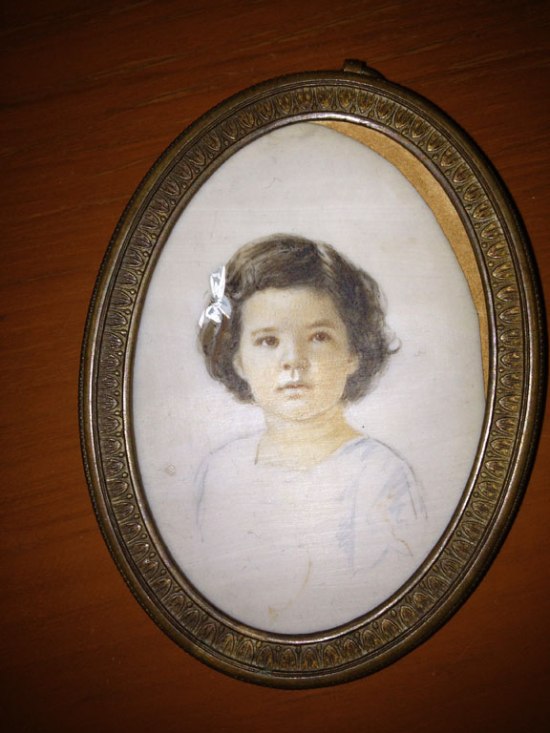 The following morning I received an email back from my new Cousin thanking me for the photograph and also giving me back answers to some questions that I had about an Uncle and Aunt. We bade each other a good weekend and that was that until on Friday evening I received another email.

When I opened the email from new cousin and saw the photo attachments I felt goose bumps.

I was speechless that Cousin Dignus had found amongst his collection of family photographs, the exact one that the painting had been made from.

Dear Cousin, it’s been quite a week! If you read this, Thank you for getting in touch with me and for putting together lots of pieces of my family puzzle that have been missing, it means a lot. You are a genius. Lottie