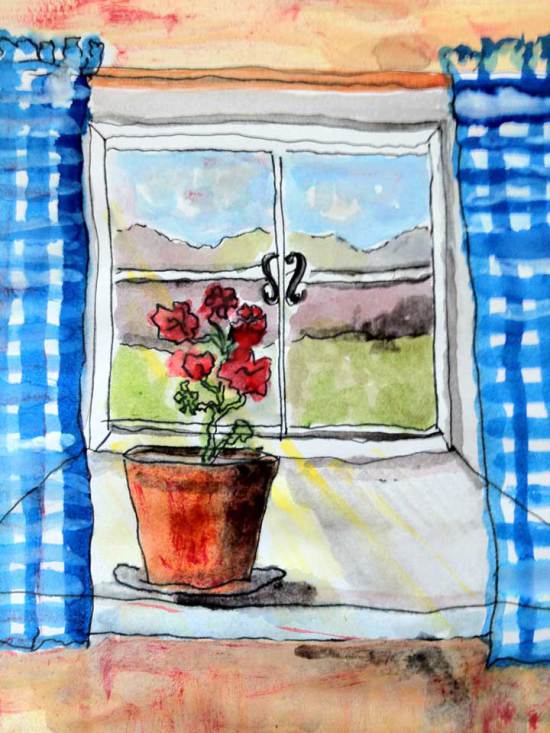 Theo was conceived at the end of haymaking. Earlier that evening almost 1,800 bales had been brought in from the fields and stored away in the barn for winter. The weather had been kind that first week of August and within 6 days Donald had managed to cut, turn and bale 20 acres of meadow without a single drop of rain to spoil the harvest.

If you’ve ever lived in the country, you’ll know that hay time is an important event. It is the precious grass harvest that will keep your livestock fed and nourished over the long winter months. It is as important to farmers and smallholders, as cereal crops are to the giant grain barons.

Donald and I had been deliberating whether to start mowing a couple of weeks earlier. He’d been out in the top field all morning mending the dry stone walls and had come back down to the house for lunch. I heard the latch first, and then the thud of his wellington boots as they fell on the wooden floor. He always washed his hands when he came in but you’d never know to look at them. They were the hands of a man who had earned his daily crust working on the land for over 50 years. Large, strong, spatulate hands, calloused and blackened from years of tractor grease. He sat down at the table and took off his tweed cap, wiping the dust and sweat from his brow as I made space for his plate and glass of cider. I always smiled when I saw Donald without his cap on. From mid forehead up his skin was as white as a lily but from there downward his complexion was ruddy and brown, weathered from a lifetime spent outdoors.

August might seem late to make hay but on upland farms, especially the ones that don’t resort to chemicals and nitrates, Mother Nature is the decider of when the grass will be ready. Preparation starts in late winter when the earth is still as cold and hard as iron. Manure is spread, the fields are harrowed and rolled and then as the pale spring sunshine slowly starts to warm the earth, and the first cuckoo echoes it’s call from the wood, a sap green blanket spreads itself upon the hills. By June the hillside meadows are a blaze of colour. Amongst the cock’s foot, meadow fescue, crested dog’s tail and rough meadow grasses, grow vetchlings, marigolds, buttercups and clovers. Meadowsweet, self-heal and ribwort plantain and so many more.

All that week the girls had excitedly been following Donald as he got on with the haymaking. A trail of barking dogs and laughing children ran behind his old red tractor, leaping out of the way as the acrobat threw grass into the air and jumping into the windrows as he worked tirelessly to get the job finished. From the goat shed as I was milking I could hear them squabbling as to whose turn it was to ‘drive the tractor’ and Donald, oh so patient Donald would make sure that one by one they got their turn.

There is a long tradition in rural communities, especially amongst farmers and smallholders of helping each other out. The tiny hamlet of Middle Tongue Bank was no exception. As sure as eggs are eggs, two days after the last of the hay had been baled and had a chance to dry out in the sun, our neighbours pitched up to help. All week they’d been watching the progress of our hay making from the top road as they drove to and from their work. Now was the time to bring the harvest home.

5.30pm and all sleeves were rolled up. Bale upon bale was lifted from their stooks up onto the trailer.  Then down we’d all go to the barn to lift them off, and then up into the old hayloft. Whilst we went back to fetch the next load the children would fight and play amongst the new bales, getting more and more excited as each time the stack grew higher and higher. By the time the last load had been brought in from the field and finally laid to rest right up close to the swallows nests in the rafters, the children could almost touch the barn roof.

In the golden glow of that late summer evening we sat out in the yard. Finished at last, our weary limbs and aching backs grateful for the rest. Cider was poured cigarettes were rolled, stories were told. It was the end of another harvest.

Autumn came and went and with it the Nidderdale Agricultural show. Leonora, my eldest daughter took first prize with her goat Auntie Nettie in the fancy dress competition and I took second prize with my hay bale. The ladies from the W.I were not impressed with my Mushroom and Red Wine Paté. I believe Mrs Ramsbottom stole the show that year with her raised game pie.

By November it was time to take the cows off the fields and bring them down to the cowshed. Dried bracken and rushes made a deep bed on the barn floor and the racks were stuffed with sweet-smelling hay. As the last cow was herded in, I realized that when they next went out to the pastures in May, I would be ready for my own confinement.

November was also tupping time. Terence, our Teeswater ram was magnificent but aggressive and never more so than in the breeding season. With the help of a friend I strapped a harness over his back and around his belly. This held a block of red dye. Within two weeks half the ewes had red smudges over their rears. We changed the dye colour and within the next week or so the rest of the ladies were sporting blue behinds.

The nanny goats were looking for romance too. They came into oestrus the same time as the sheep. At the first hint of a wagging tail and the noisy bleeting that accompanied it, Billys were brought in for the job. Blink and you’d miss the whole event. It only takes a Billy goat 30 seconds to consummate his marriage.

All winter I carried on with my farm work as normal. Feeding the pigs, milking the goats, making bread and cheese. Hay was carted up to the fields in a wheelbarrow for the sheep, and heavy bags of feed placed in their troughs. The cows were the hardest work. 8 beast demanded fresh bedding, bags of barley, bales of hay and their endless thirst meant spending hours waiting for outside taps to thaw. All the time Theo was growing inside me and I could hardly wait for spring.

19 thoughts on “By The Light Of A Harvest Moon”