I must warn you that this post contains graphic images of animals being slaughtered. If you are vegan, vegetarian or in any way squeamish, then please do not read it.

If on the other hand you are interested in learning about this special day in the Muslim calendar, you are in luck; your South-east Asian correspondent has gone to great lengths this morning to bring you authentic coverage of Eid al-Adha from her local mosque in Pancoran.

Yesterday evening the whole of Jakarta rang out to the sound of prayers. Mosques everywhere were filled with worshippers and at first light this morning, the football field in front of our apartment started to fill up with Muslim families joining in the communal prayer known as Takbir. As today is a religious holiday, the roads were almost empty and for once there was no roaring traffic thundering in the background.

Despite having a hangover from hell, I made the bold decision to visit our local mosque, where I had been told on good authority from Andy that there would be ritual slaughtering taking place.

Eid al Adha is celebrated by Muslims all over the world to commemorate their belief in Abraham’s willingness to follow God’s command to sacrifice his son Ishmael. According to the Quran, at the moment that Abraham was about to kill his son, Allah stopped him and told him to sacrifice a lamb instead. As Eid al Adha falls at the end of Hajj, the journey of dedication and purification, it is seen as an opportunity for second chances and renewal.

To mark this special day, Muslims who can afford it, buy a cow or a goat to slaughter.One part is kept for the family and used for a celebration meal, some goes to friends and the last third is distributed to the poor. The act of giving away the meat, along with the communal prayers is an essential part of this day.

Over this past week, Jakarta has been full of livestock. Trucks carrying cows, goats tied up at the side of the roads and makeshift stalls housing cows, all waiting to be sold.

I was in two minds about going to the Mosque this morning. A large part of me felt quite sick at the thought but then another part told me not to be stupid. It’s not like I’ve never seen animals being slaughtered, I’ve kept a farm, and I’ve taken plenty of animals to the abbatoir. However I knew that what I was going to witness this morning would be nothing like anything I’d seen or experienced before. Since this is our last full day in Jakarta I felt I wanted to capture something of this religious festival and to be amongst the Muslim people that have been a part of my life now for two years.

I knew there would be blood, lots of it but I wasn’t expecting to see live animals just feet away from where their peers where being cut up. Despite the frenzy of activity, noise and amount of families watching, the tethered animals showed no signs of distress as they waited their turn for slaughter. The men worked quickly and skillfully, many of them barefooted and in the mosque itself others sat on the floors sorting the meat into piles. Children chatted excitedly and where not in the least fazed by the goings on around them. The locals were curious about me, but very friendly and there were lots of smiles as I went about taking my photographs. Seeing carcasses being chopped up and intestines and stomachs is one thing but to see this through to the end I felt I should witness an actual Halal slaughter.

As the beast was untied and led to a firm post, the men encouraged me to go to the front so that I would get a better view. The front and back legs of the cow were tied and then with some dexterity they managed to get the animal down on the ground. The knife was sharpened and the Imam stood with a microphone and chanted prayers. Two other men sat down by the cow and resting a piece of paper on it’s flank they quietly mouthed a blessing. All around there was a hushed silence as then the knife was drawn out of it’s holder and held against the cows outstretched neck. Quick as lightening the cut was made and within seconds blood spurted everywhere,and the final last breaths of life slipped away as the cow bleed to death. Although this sounds horribly grizzly, it was in fact very moving. The four men involved in the slaughter,had been stroking and talking quietly to the cow all the time and not once was it pushed or shoved or treated badly. I’ve witnessed some horribly cruel sights in British livestock markets and abattoirs during the years that I kept a farm but watching this killing this morning and seeing how carefully and respectfully it was done has been an eye-opener. 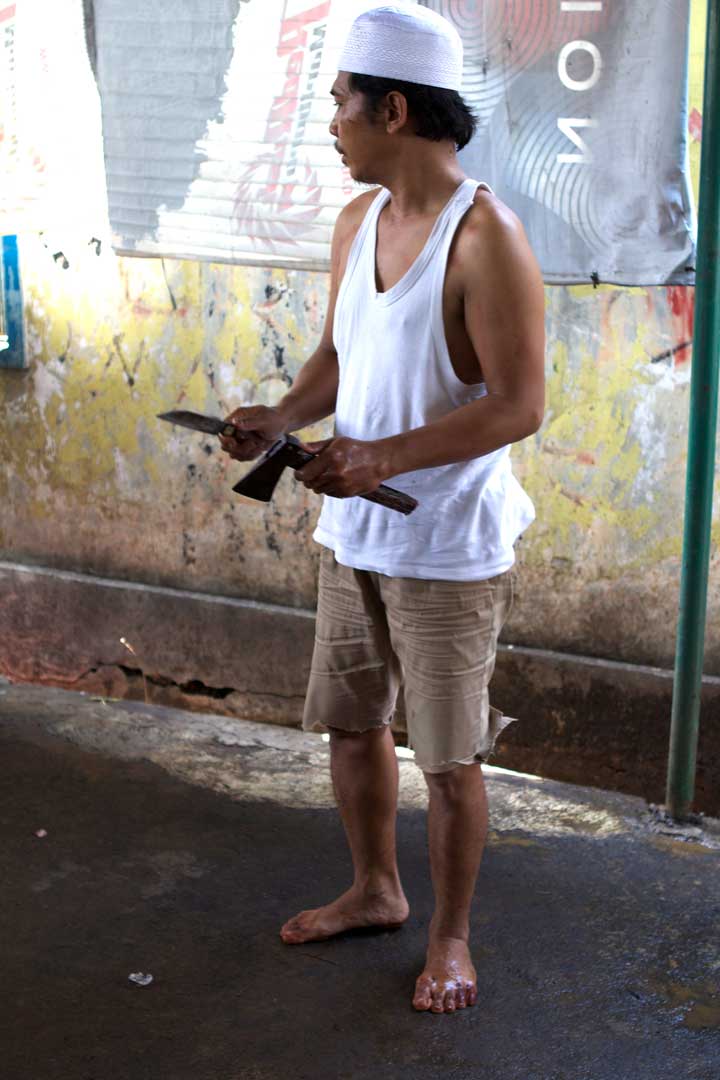 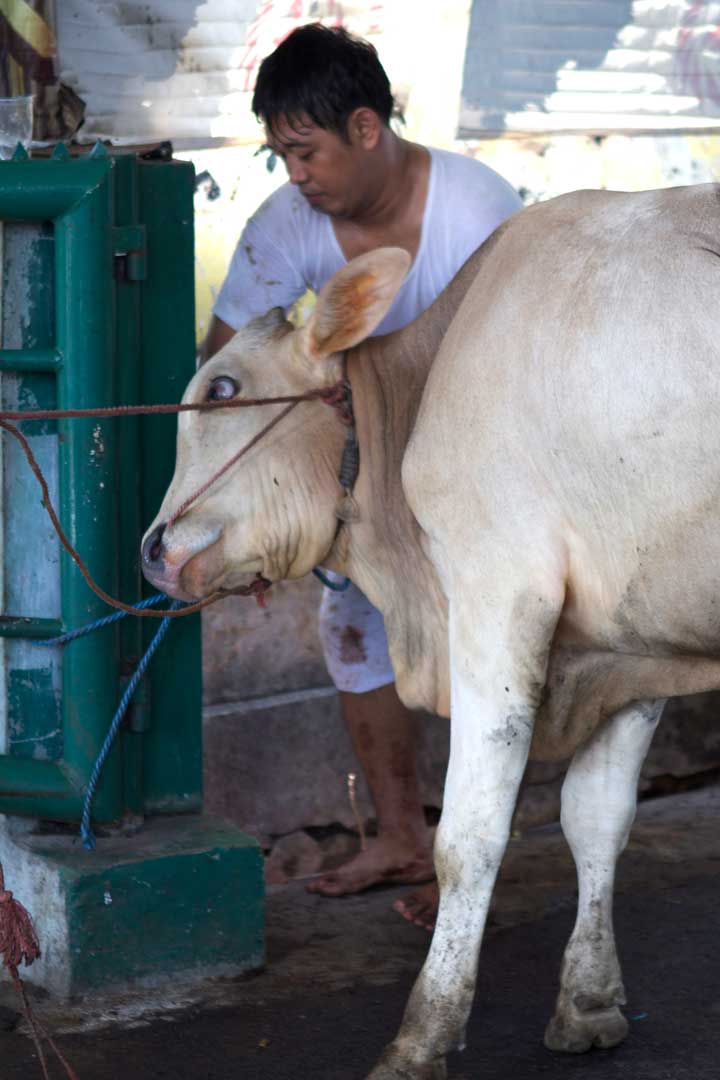 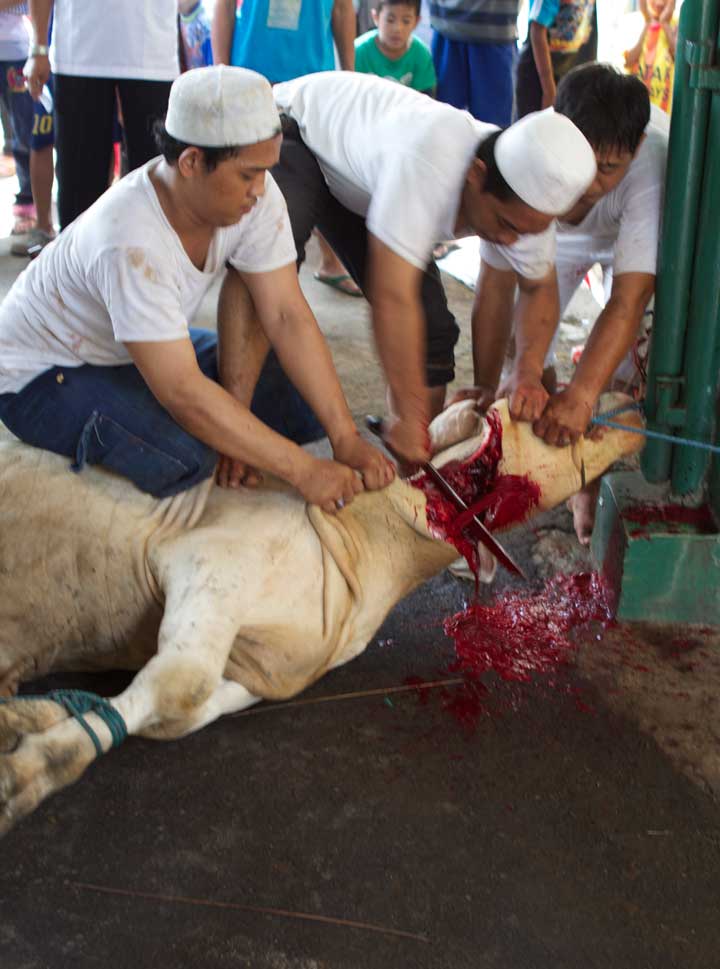 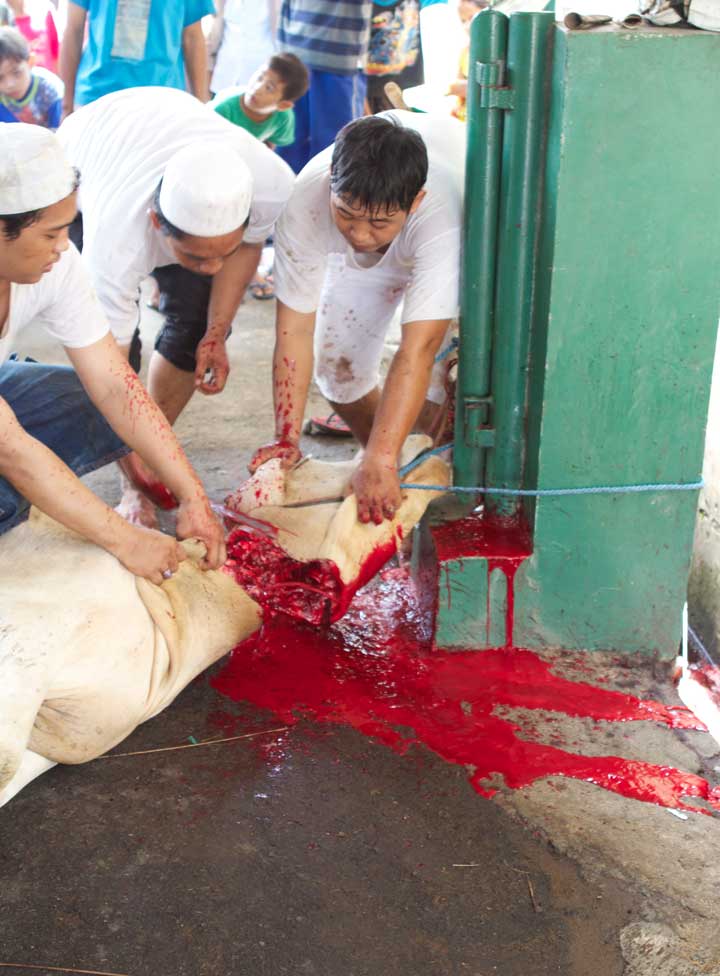