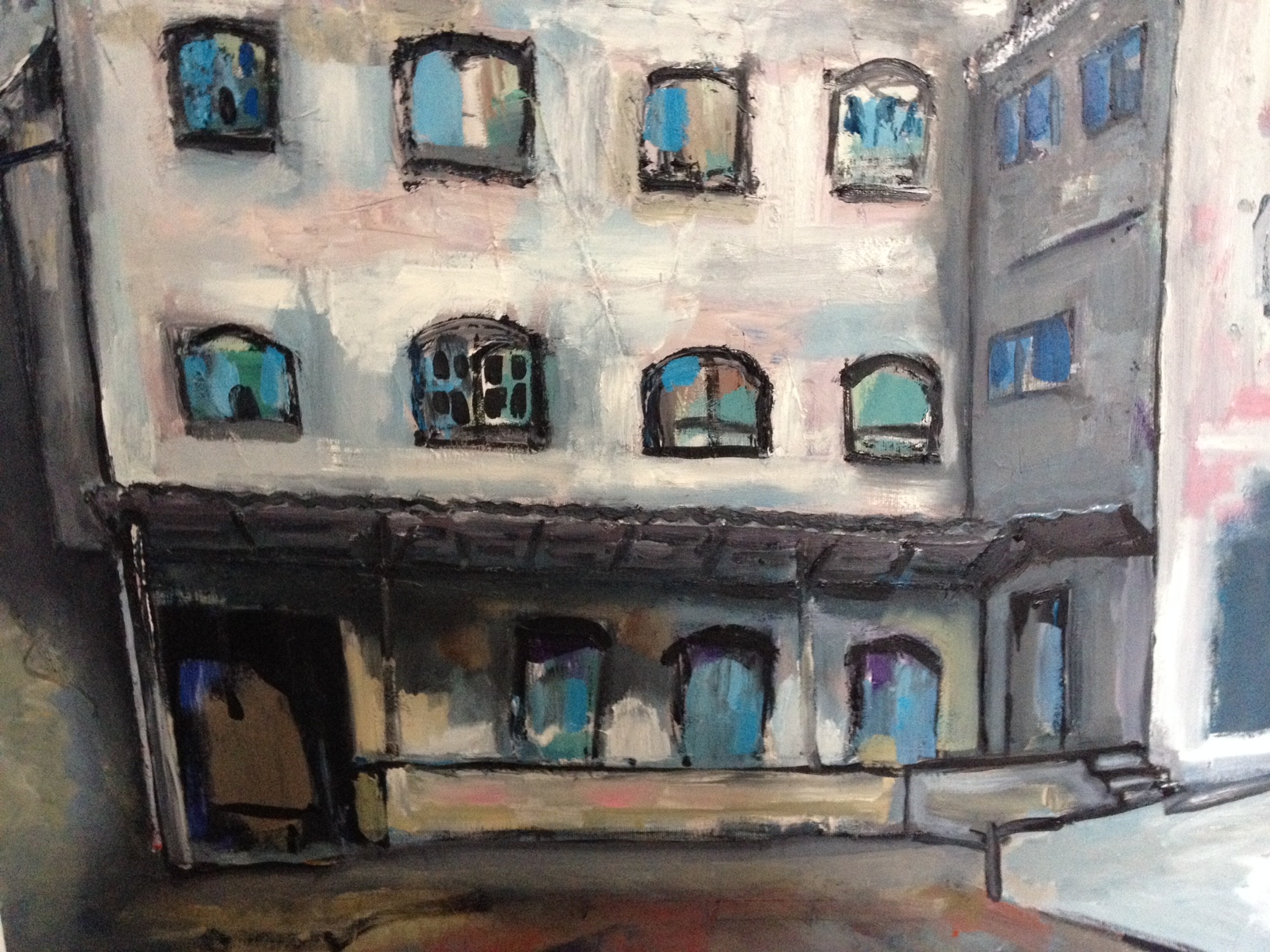 Mercifully, I can probably count on one hand the amount of times in my life that I’ve been so embarrassed or ashamed that I’ve wanted the ground to swallow me up, right there, right then. Being a fairly confident, laid back type of person, it takes a lot to make me blush or drop my cool however, something quite out of the ordinary happened a few weeks ago. Something so toe-curling that I still squirm in my seat thinking about it as I write this post.

It was a regular Sunday morning here in Las Pilas. The sun was shining, Colin had been out for his ‘Paseo Domingo’ and all was well in the world of Casa Nevino. Being a lazy, indulgent sort of day, I’d made no effort to tidy up the house or make the beds. Instead I’d poured myself a large glass of Cava juice and was messing about with some drawings in my studio. Upstairs, Don Pedro O’Riley was working on a painting, Buddha Bar playing at top volume in the background.

Two large glasses of Cava juice down, I decided to go outside and stretch my legs. While watering the pots of geraniums at the front of the house, I noticed a large group of people, a swift head count made it forty or so, walking up the hill. They were all ages and I didn’t recognise any of their faces. ‘How strange’ I thought to myself ‘I wonder what they are doing’? as I wandered back in to the house and got on with my work.

An hour must have passed when I became aware of loud shouting outside our front door. ‘Lottie! Pedro! Estas en tu casa?’ I put down my work and went to see who was there. Imagine if you will, my surprise on opening the front door to find the merry group of 40 + visitors and a handful of locals standing on the doorstep.

Pepe could hardly contain his excitement. He was jumping up and down like some sort of manic elf and beaming from ear to ear. It should at this point be said that, for pretty much all of the time, Pepe’s days are mostly spent sitting on the low whitewashed wall across from the bar, chatting to whoever walks past or feeding titbits to Colin. Today however was different. He’d clearly given himself the mantle of ‘Entertainments Manager’ to the hoard of sightseers that were now stood waiting expectantly in our yard.

Not to be outdone by Pepe’s smart new career move, Little Jose stepped forward to add his pennies worth. At rapid speed (Andalucian dialect is famously fast, this was even faster) of which probably only 30% I really understood, he explained that the visitors now gathered in our forecourt where a big family gathering who had come specially from Jaen for a visit back to the village. One of their relations had built the old flour factory here. From what I could gather, one of the great-grandparents had lived in our house. ‘These people are very keen to see your courtyard’ Jose explained and as an after-thought ‘only your courtyard’.

‘Of course! Of course!’ I said ‘They are most welcome!’ ‘Come in! Come In! I gushed, gesticulating rather drunkenly that they should proceed through the large wooden doors in to the courtyard. But suddenly, it was like the flood gates opening of the Grand Harrods winter sale, – the punters flooded in. Hoards of them, all peering and poking and looking around and then! before I knew it they were inside the house. This mad crush of people, pushing, and shoving and squeezing themselves in to every available space on the ground floor.

‘PEDRO!’ I wailed loudly ‘Come and help me!’ The music upstairs was so loud I doubted that he could hear me ‘P-E-D-R-O!’ I shrieked like some mad hyena from the last vestige of space that I could find – the log basket by the fire. And then he appeared! But with his sudden appearance, so too the bowing and scraping started ‘ Signor Pedro is a professor you know’ said Pepe proudly, now totally at ease in his new role as Chief Entertainments Manager ‘And, a very famous artist too – sold one of his paintings to the King of Spain don’t you know’ said Little Jose puffing out his chest not wanting to be outdone. I sunk my arse deeper in to the log basket.

The madding crowd dispersed themselves as best they could around our pint-sized ground floor. Every cupboard, every drawer, every nook, every cranny, every single object was picked up, looked at, scrutinised and, for the most part, admired. I fell for it hook, line and sinker – After what was now almost an entire bottle of Cava juice I couldn’t help but feel anything but happy that this unexpected troupe of visitors were enjoying their time in our house. The house that once belonged to one of their ancestors and that now we had made our own. And, they made ALL the right noises. Lots of ‘Ooh’s and Aah’s’, and much appreciation for our sympathetic restoration.

What these wandering travellers didn’t yet know was, that I had a box of photographs and letters. Lots and lots of letters that we had found, along with live bullets in the hayloft at the end of the house. Over the summer we had dismantled part of the end of the house. The last vestiges of the working Finca, and, hidden deep inside the dusty old straw, the old wine skins and boxes of rifle cartridges, where leather satchels of correspondence relating to the Spanish Civil War. Personal correspondence, photographs, letters that for the most part I could not decipher because of my appalling lack of Spanish language. I’d purposefully set these aside for later, in a box in the hope that one day I could dismantle them, make some sense of this bloody history and discover for myself what life might have been like for the person/people that lived in our house years before.

It therefore seemed appropriate that at the point that the house becomes a cul-de-sac – namely my studio space in the old donkey stable, that I should hand over this box of treasures to our visitors. They were after all the rightly inheritors of such bounty. These letters were penned in the hand of some relative of theirs – I’d be mean not to part with such a stash even though I so desperately wanted to keep it for my own.

Well, if I thought the unexpected visitors mad dash inside our house was akin to a Harrods Sale, then I was wrong. So wrong. The tears that ensued up on my giving them the box with the letters and photographs was beyond compare. No amount of sale items, no amount of massive HD TV’s at bargain price could compare with the joy on these strangers faces.

It was at this point that Don Pedro took over as bountiful tour guide. ‘Please come upstairs, come and see my studio, see what we have done with the top of the house’ I was so busy wiping away my own tears at how happy I had made 40 + people on gifting them a box of dusty, ancient letters that I quite forgot that my Piss Bucket was still at the top of the stairs. Unable to hail Pedro down, to even get his attention because of the mad chatter from what seemed like a thousand Andalucians descending on our home I just prayed that he’d found a way to make the horrid, stinky bucket go away.

At last, trailing behind the what now seemed like the 5,000 Spanish visitors I noted happily that FULL, to BRIMMING (remember it’s Sunday, and I’ve been idle all morning) Piss Bucket was not at the top of the stairs – at this stage I couldn’t actually give a damn where it was, as long as it wasn’t obvious, I didn’t care.

Please now enter (stage right) our packed out front bedroom, which from now on, will forever be referred to as, SCENE OF CARNAGE.

I am referring to THE MARITAL BED. The lovely bed where we sleep and where I, only the night before had a massive menstrual haemorrhage and which flooded, repeat FLOODED our special MEMORY FOAM MATTRESS. I’d stripped the bed earlier but the horrendous remains which had occurred from the night before, plus 100’s of other leakages over months, and years passed, remained clear for all to see.

It was at this point that I really wanted to die. Here, crammed in to this tiny room, it was like taking 50 CSI investigators to a crime scene. There was no going back. Desperately trying to avert their gaze from my blood soaked/filthy mattress I then found myself manically pointing out the new windows that we’d recently had custom made and installed at vast expense. There were a few oohs and aahs but then their eye’s immediately turned STRAIGHT back to the mattress. Little Jose and Pepe were having a field day! London Dungeon eat ‘yer heart out.

Don Pedro, finally noticing my puce face, and realising the situation that we’d got ourselves into, made a point of trying to direct attention to the old hooks on the beams He asked if anyone knew what the dozens of hooks up on the beams on on bedroom might have been used for. ‘Blood sausage’ ‘Morcilla’ they all cried like baying hounds…oh Lord, I could have wept.

But you know, behind every cloud is a silver lining. Ghastly, embarrassing, hideous blood stained mattress aside, my dear beloved husband was given a commission on the back of it (perish the thought) ‘Paint the factory!’ ‘Paint a picture for our dear great-grandfather…’ and he is, right now, painting a picture of the factory ‘money is no object’ they said…

We wait and see!