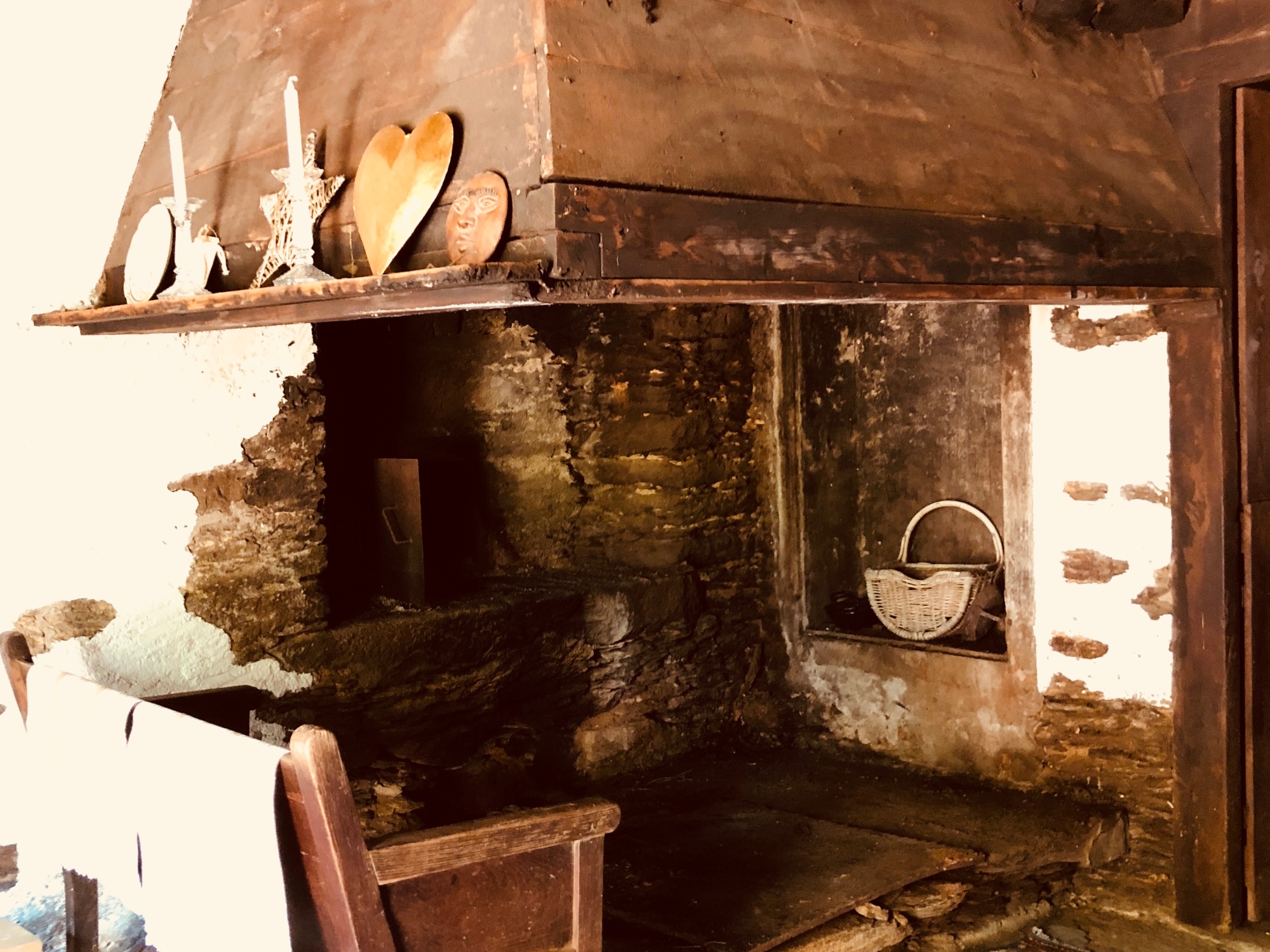 Well folks, those rose tinted spectacles of mine took a spectacular tumble the minute we opened the front door. My fantasy of The Red House stopped right there on the doorstep.  All my dreams for a perfect first evening smashed in to a thousand tiny pink pieces. If the weather on this summer solstice night was inhospitable, alas, there was nothing to offer even a small vestige of comfort inside. The walls glistened with moisture, tiny droplets clung to the cold, stone walls and the floor was no better. Puddles of rising damp lay in the dips of the worn stone paving. Seriously? Yes, seriously I wanted to weep. Irishman located the fuse box and turned on the electrics. no I shall rephrase that, the electric; one solitary bulb, splattered with fly shit hung dejectedly from the cobwebbed beam above our heads. Save one socket, that was the only light and electric we had in the house. This wasn’t the homecoming of my dreams, it was the homecoming of my nightmares. And, as in all good horror movies, the scene was nicely completed by the resident bat colony making a mass exodus as soon as the dim light came on;  some swooping down and past us and out through the front door, others made their exit up the chimney. At least the poor things could escape, we were stuck here.

No time for tears or recriminations, the cats needed my attention. I scooped up some earth from outside and made a kitty litter tray of sorts in the back bedroom upstairs. The felines were no longer belligerent just sleepy and disoriented. Fed and watered I went back downstairs to help Irishman empty the car. The dogs had jumped back in and were looking at us as if to say ‘ are you serious? you think that we are going to live in a shit hole like this?’ It was a truly pathetic sight.

One of the reasons I’d fallen so hopelessly in love with the house when we’d first seen it was the splendid fireplace. It is enormous and takes up at least 1/8th of the downstairs room. Irishman and I started to build a fire with logs that we’d found in the cow shed. Maybe if we could generate a bit of heat, we’d all feel a bit happier. Never having made a fire in such a huge fireplace, in my wisdom I told Irishman that we should build it right in the middle of the hearth. Very bad idea. Within minutes the room was filled with smoke and upstairs was full of smoke too as the chimney breast in our bedroom had holes in it. The evening wasn’t getting any better. Coughing and spluttering I made us an omelette on the camping stove and then we both decided to call it a day. We brushed our teeth at the sink and made our way up the rickety stairs.

A fortnight previously, we’d visited the house after collecting the house keys from the estate agent. I’d made up the bed that the vendors had left for us thinking that it would be one less thing to do on moving day. This bed was no beauty, it was made of chipboard and covered with a plastic veneer, and in place of a mattress, it had an old stained piece of foam. Despite the basic nature of our temporary bed, I was happy that they had left it for us as our own bed wouldn’t be arriving for at least another week. Candles were lit, bucket and loo paper placed at a respectable distance from our sleeping quarters but close enough should I need it in the night. We stripped off and jumped beneath the covers. I’d left the dogs bedding in the car so they joined us on the bed. ‘Is it my imagination’ said Irishman, ‘or are these sheets wet?’ There was no doubt about it, the sheets had succumbed to the damp and not only that, as the bed began to slowly heat up with our bodies, there was a really nasty smell of pee coming from the ‘ mattress’. ‘Can you smell pee?’ I whispered to Irishman. ‘Yes, I thought it was you?’ I began to feel sick. Here we were, lying on damp sheets on an old piece of foam that reeked of stale urine. Oh Lottie Nevin, what the hell have you done!

The cats were now fully awake and not happy. They’d heard us come up to bed and were meowing and scratching pitifully at the door. After five minutes, I could bear it no longer and let them out. Despite the stench from the mattress and the damp sheets, Irishman had miraculously fallen to sleep and so too had the dogs, but even though I was exhausted, sleep evaded me. For a while the three cats padded around the room and then one by one, I felt them slowly and cautiously jump up on to the bed with us. It’s unheard of for the dogs and cats to lie together, normally they’d be chased off but this was no ordinary night. It reminded me of the Christmas truce in 1914 when the Germans and British soldiers emerged from their trenches and instead of fighting, played football together and exchanged gifts. For once there was peace between the cats and dogs. Gradually our little animal family settled down to sleep, their furry bodies desperately craving security, curled around ours, the dogs across our legs. The candle flickered, the wind beat against the windows. I had so much to sort out now, so much more to do than I’d originally thought would need doing but despite this I felt hope and, dare I say it, happy. Instead of counting sheep, I started to work out how many paws were on the bed. One, two , three, four, five, six, seven, eight, nine, ten …